You are here: Home / Memories / Not A Christmas Person? 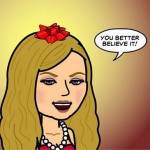 I’m really not a Christmas person. I wasn’t even as a kid, mostly due to the fact that I learned at an early age of 8 that Santa wasn’t real. By the time I was 9, well, I learned Christmas didn’t matter as much when it came to receiving gifts as getting food in your belly and having a roof over your head. My younger sisters were all about Christmas and during those times when we didn’t get anything, I would draw and color fantastic things, and then give them to my sisters as gifts. I use to make cool games out of paper to entertain them.

I never liked the music and if I heard it before Thanksgiving. If Christmas was mentioned before October, I got a little bit mad as it’s one of my peeves. Now, I’m no Scrooge, as the only thing I do like is giving gifts. It appeals to me feeling like I’ve helped or have made others happy. I’m not totally against the commercialization of the holiday, but it is a bit overkill sometimes.

By the time I was a teen, I think some of my family realized this and just completely forget to get me gifts as I never put together a Christmas wish list. It’s like I’ve had this vibe coming off of me telling others not to give me anything. If I asked for anything, it was for necessities, and that was not often. I managed a lot on my own.

Now, that I have my son, it’s hard to try to get into the Christmas spirit for him. I do get him gifts and I do decorate a tree for him. He is seriously more spoiled and luckier than I was, which I’m thankful for. I know my son has figured out Santa is not real, but his dad (my ex-husband) doesn’t know, so I’ve played along.

However, when I reflect back in this post, maybe I am a Christmas person? I enjoy giving. I don’t need a gift back. I thrive on the person’s reaction and a simple thank you.

While I know Christmas is based on the birth of Jesus Christ, but has been bastardized throughout the years into a mythological day of merriment and gift giving, I think the biggest thing I know is, that it’s a time for family. This is what I learned at a young age when time was difficult.