You are here: Home / Mommy Stuff / Kids Toys And Kids Meals – Your Policy 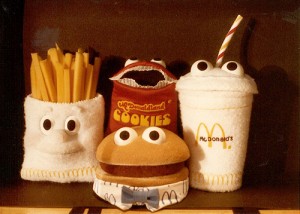 I love to take my son on occasion to have a Happy Meal or a Kids Meal. Of course, they come with toys. I remember when I was young that it was a real treat as we did not have much money. However, I also remember that I would not be able to play with the toys until I finished my meal.

I still carry this concept on with my son. Less than 2 years ago, it was hard to get him to try anything. He prefered to eat chicken. Now, I can at least get him to try things. It was this issue that I decided to not allow him to play with his toy until after he ate. I would snatch the toy and put it aside.

On occasion, I have seen other parents tune into my conversations and have had mixed reactions with it. Some thought I was a little mean. Others thought it was a great idea because they were having issues. Of course to those who thought I was a little mean, some accepted my reasoning. Others did not and I did notice their children were not eating their meals. In fact, the parents were on the verge of yelling if their child did not eat their food.

My question is… what is your policy… that is, for those who have occasionally taken their children out to eat? Do you take away the toy if your child is showing more interest in the toy rather than eating? Or do you let them have it?